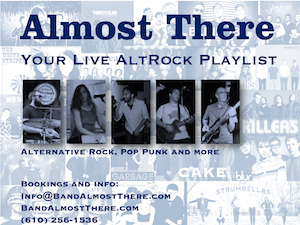 Almost There - Alternative/Modern Rock, Pop Punk of the 90s

Almost There is a 5-piece cover band specializing in Alternative/Modern Rock songs from the '90s to the present, with a bit of '80s music tossed in as well. Bands covered include Green Day, Red Hot Chili Peppers, No Doubt, Blink 182, The Killers, etc. Based in Wayne, PA, the band plays in the greater Philadelphia area, particularly in Philadelphia and the western suburbs (i.e., Delaware County, Chester County, Montgomery County). Formed in 2017, the band members are multi-generational, with Baby Boomer to Gen X to Millennial members, and offers music that would appeal to both older crowds who may have some '90s nostalgia as well as younger ones who may enjoy '90s and more modern music selections. While the band is relatively new to the Philly music scene, the members have decades of experience playing in and around the Philadelphia area and beyond. Almost There is the perfect fit if you’re looking for an upbeat, energetic sound and newer music covers. For more information, go to BandAlmostThere.com or on Facebook, Twitter and Instagram as @BandAlmostThere.