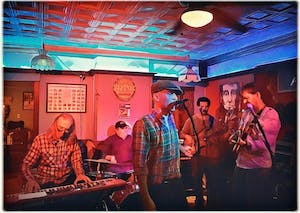 Loose and Alright was formed by guitarist Sam McIlvain. An open and ever evolving collective, the band is a haven for talented musicians who crave the B3 heavy, funky/soul/jazz/ blues fusion that was happening in and around the late 60s, early 70s. Think the Headhunters, Grant Green, Jimmy Smith, the Meters, Deodato, the JBs, et al. The core of the current lineup consists of Wally Smith, Daniel Bacon, Scott Davis, Lynn Riley, Dan Rendine, and McIlvain. “I met all the guys originally through various projects I played with or knew of,” said McIlvain. “Whether in original or cover bands, they could let their hair down and have straight up fun and really stretch it out when they played with us.” He added, laughing, “Of course, the idea of playing some deep cut Meters tune instead of Don’t Stop Believing or September also helped.” The band plays clubs, bars, and private parties. Fun, energetic, and professional to a T, they capture the feel and spirit of the music they so clearly love. “This band is really nothing more than an homage to all the greats who made these fantastic recordings back in the day.” stated McIlvain, “ We’re just doing our part to pass it along, perhaps introduce it to a new crowd, and add our own twist to these soulful, funky tunes”.