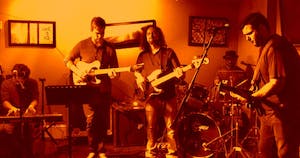 The Commission is a rock and roll cover band who has made its way playing the songs they love. Formed in October of 1999 by then Conestoga High School students Scott Wham (lead vocals/guitar) and Matt Hildenbrand (drums), The Commission has been delivering its uncompromising energetic performances to bars and clubs throughout the Greater Philadelphia area for the past 20 years. From the driving rhythms of the Rolling Stones and The Band to the experimental sounds of Pink Floyd and The Grateful Dead, there is something for everyone at a Commission show.

In addition to Scott and Matt, The Commission is a purely local affair, featuring Conestoga graduates John Hildenbrand (keyboards) and Ben Visich (lead guitar), and Germantown Academy graduate Mitch Beer (bass). John and Mitch are often featured together in some of Philadelphia’s finest up-and-coming acts, including Stereo League who has been named as an XPN Artist to Watch.

On October 26th, The Commission will celebrate 20 years of making music at 118 North. This promises to be a great party that you don’t want to miss.